The silver of the House of Menander at Pompeii

A real treasure! The objects displayed in the pictures are the silver found in December of 1930 in the House of Menander, in the double floor of the baths where they had been hidden almost 20 centuries before.  The set is composed of 118 objects including bowls, cups and drinking jugs  (argentum potorium), dishes and trays to eat (argentum escarium), spoons, ladles, salt shakers and other objects including two stunning mirrors.

The set having a total weight of about 24 kilograms, was kept in the bottom of a wooden coffin wrapped in a blanket; in the upper part were kept  the family jewels and a bag of golden and silver coins, the silver set was in the bottom.

Some of drinking cups with depicted birds document the best gold production of the late republican and early imperial age.

The objects are decorated with embossed motifs, there are  landscapes, mythological scenes such as  the representation of the 12 labors of Hercules, scenes from the myth of Dionysus,  chariot races and olive trees branches. 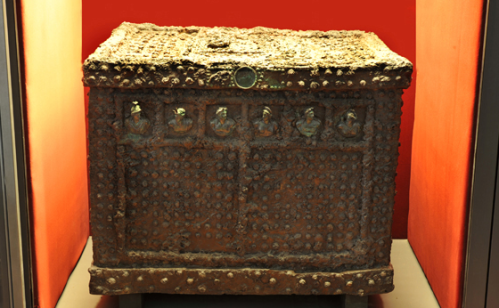 The pottery is composed of a set of dishes, plates, cups and bowls, egg cups and a large plate that was used to bring food to the table. A small tray  with a gold emblem in the center  is supposed it was exposed on the table.

The entire set is currently preserved in the National Archaeological Museum of Naples.