The Blue Grotto, situated at Anacapri, was known locally as “Grotta Gràdola”, the name being taken from the neighbouring ancient landing place of “Gràdola” and “Gradelle”, popular because of its narrow access, and because of the legends about monsters and witches that dwelt in it.

The revelation of the “Blue Grotto” was thanks to two German tourists who visited Capri in 1826: Augustus Kopisch, a writer, and Ernst Fries, a painter; their chief merit was that of bestowing a new name: “Grotta Azzurra”.

The cave sank during a geological age 15-20 metres below the present sea level and thus blocked every opening through which light might enter directly, except the narrow breach of access with the result that both the cavity of the grotto and the sea basin that is enclosed in it acquired two different and magical colours, for, on one side the sunlight penetrating from below through a veil of sea water springs out and is reflected onto the sides and the vault of the grotto colored with azure; and on the other side, this light being reflected by the white sandy bottom of the grotto renders the water strangely opalescent so that any object that is bathed in it drips and vibrates with a silvery light. 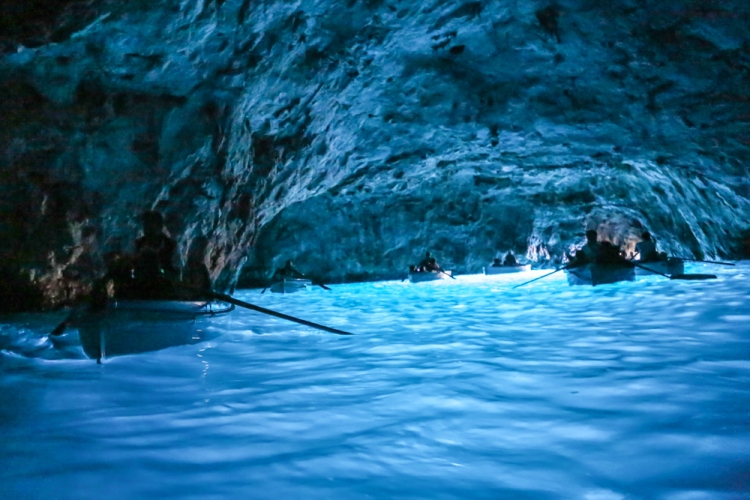 The Romans not only knew the Blue Grotto (in italian “Grotta Azzurra”), but had made it the object of particular investigations, though the type of their researches was obscure. At that time the conditions of the grotto were the same as they are today in the days of Augustus and Tiberius. And a careful study of the remains of Roman works inside the grotto and of the ancient structures on the outside, may assist us to understand what the “Blue Grotto” meant to the Romans.

Along the end wall facing the breach of access the Grotta presents a cavity; this cavity is accessible by a small landing step covered by Roman concrete work; while a square opening in the shape of a window which is accessible from a step evidently cut by human hands is opened in the wall of the rock just opposite the entrance.

The rocky landing step and the square opening seem to be made on purpose to permit people to land and to enjoy comfortably from the land the fascinatingly clear basin of azure. But this square hollows reaches deeper into the mountain becoming an increasingly winding and narrow cuniculus. The slabs of rock heaped at its sides suggest that the Romans opened this tunnel searching for spring water and abandoned it after a fruitless exploration.

Because of its position below the imposing “Villa di Damecuta” it is obvious to suppose that the Grotta was a “nymphaeum” that was accessible from the sea, and perhaps also from the land by a more secret road that has now crumbled. 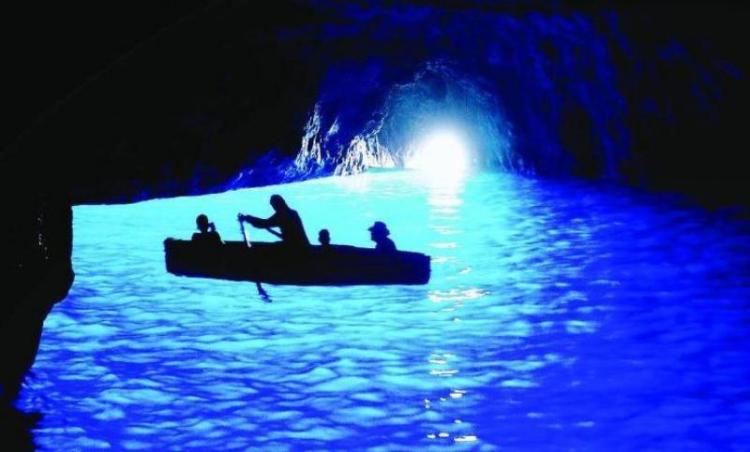 My name is Emiliano Tufano, I am an archaeologist and tour guide. I run an organization providing archeaological and cultural tours in Campania. When I was ten years old I found a piece of painted pottery on a small piece of land belonging to my family, which is located nearby the ancient Greek city of Paestum. For the whole of that day I kept this piece of history in my hands. I remember that it was decorated with a black figured scene of a Satyr driving a biga. The feeling I had when realized it was a genuine antique object was very strong, and I started asking myself many questions about the people who occupied that area across the centuries and, particularly, about the man who made such a beautiful piece of work. Since then I started collecting all sorts of pots and stones that I found while I wandered through the countryside. I used to divide my finds simply on the basis of their shape and color. They were the first steps of me becoming an archaeologist. At school, history was my favorite subject; therefore my decision of which degree course to choose was an easy one, Archaeology. Today, archaeology is my profession and my passion. Throughout the years I developed skills in fieldwork and academic research. I participated as a field director in several excavation projects of fundamental importance across Italy and I was engaged in significant academic research projects in Sicily, Tunisia and Libya. I now fulfill my ambition with a PhD project about the Sicilian prehistory. However, my interests go beyond just the history. I have a strong creative side and I love photography, and I write articles for a newspaper in my local area, play football and enjoy diving. I enjoy traveling and have been to many different countries, where I always make particular efforts to learn as much of the local language and culture as possible. In 2010 I became qualified to work as a tourist guide of the Campania Region, and today I offer guided tours in Italian, English and Spanish. I live my job with passion and professionalism. With me you can visit the wonders of Campania: the Vesuvian archaeological sites of Pompeii, Herculaneum and other beautiful sites, such as the historic centers of Naples, Caserta and Salerno, the Amalfi Coast and Sorrento Coast, all the major churches and museums. Through exclusive and tailor-made tours, according to your requirements, you will receive quality service and cultural enrichment. View more posts